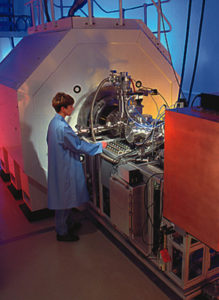 A mass spectrometer is a an analytical instrument that measures the mass-to-charge ratio (m/z) of charged analytes (ions). Often the mass spectrometer, or downstream software, can determine the charge as well. Thus, the instrument can effectively provide mass measurements rather than m/z measurements. For example, if the instrument detects an ion of m/z 500 Daltons but it can be determined that the charge is 2+, then the mass (m) is 1000 Daltons. An important feature is that a modern mass spectrometers can measure many analytes simultaneously. Thus, complex mixtures of analytes can be introduced to the mass spectrometer at once. The mass spectrometer will analyze the mixture and output a mass spectrum showing a peak at each m/zthat was detected. Scan times differ between instruments but the typical times to get a full mass spectrum range from 100 milliseconds up to a second. The range of masses that can be measured, the accuracy or the measurements, and the resolution that can be achieved vary greatly depending on the instrument. See the mass analyzer section for more details. The height of each peak is representative of how many ions are being detected at that particular m/z. These peaks are not directly quantitative; however, careful use of internal standards and references can provide quantitative information.
What are MS1 and MS2?
MS1 and MS2 refer to two very broad categories of MS scan types. One of the primary uses of mass spectrometry is to identify peptides and proteins. It is often not possible to do this by m/z measurement alone so commonly mass spectrometry methods involve fragmentation of petides and measurement of the of the resulting m/z ratios. Scans which measure m/zratios without fragmentation are termed MS1 scans. Scans involving fragmentation are MS2 scans.